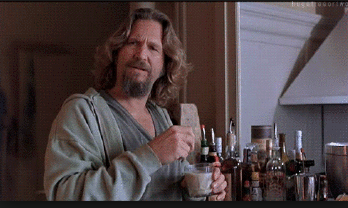 WHITE RUSSIAN CUPCAKES White Russians Cupcakes? No Dude doesn’t make them. There’re Maudy’s little invention. Even though she doesn’t live with The Dude, she likes him quite a bit. Heck, he helped her conceive. So Maude felt like showing a little gratitude. Knowing how much Jeffrey (as Maude calls him) loves his Kahlua, Maude created this in honor of his Dudeness, “The Other Jeffrey Lebowski,” a.k.a. The Dude. “They’re right tasty,” as The Cowboy Stranger would say, and quite easy to make. Enjoy em! 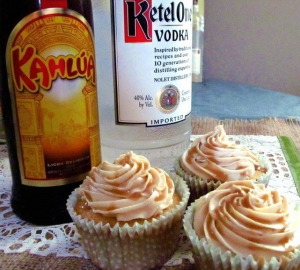 INGREDIENTS: 1 cup Sugar ½ cup Butter 2 Eggs 2 teaspoons Vanilla Exract 1 ½ cupls All-Purpose Flour 1 ¾ teaspoons Baking Powder ½ cup Milk 3 tablespoons Kahlua Preheat oven to 350 degrees. In a mixing bowl, cream together the Butter & Sugar. Beat the eggs, one at a time, then stir in the Vanilla. Combine Flour & Baking Powder in a separate small bow, then add to Creamed sugar and mix well. Add Milk, and stir until smooth. Place paper cupcake-liners and place in cupcake Baking Pan. Spoon cupcake batter into the cupcake liners. Bake for at 350 degrees for about 16-18 minutes, until a toothpick that is poked into the center of a cupcake comes out clean. Take cupcakes out of oven and set aside to cool. Brush tops of cupcakes with Kahlua. Let it soak into the cake. KAHLUA FROSTING 8 ounces Cream Cheese, at room temperature 1 stick Butter, room temperature 3 cups Powdered Sugar ½ cup Cocoa, unsweetened ½ teaspoon Pure Vanilla Extract 6 tablespoons Kahlua 3 tablespoons Heavy Cream Beat cream cheese, sugar, and butter together until smooth and thoroughly mixed. Add Cocoa and mix. Add Vanilla and Kahlua and mix. Add Heavy Cream, and mix till smooth. Frost each cupcake with frosting.   Excerpted From GOT ANY KAHLUA ?  by Daniel Zwicke,                                            with a little help from The DUDE   More Recipes in The DUDES BIG LEBOWSKI COOKBOOK  -  GHOT ANY KAHLUA ? 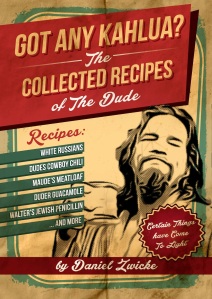 THE COLLECTED RECIPES of THE DUDE

Posted by xpicassox at 5:29 PM